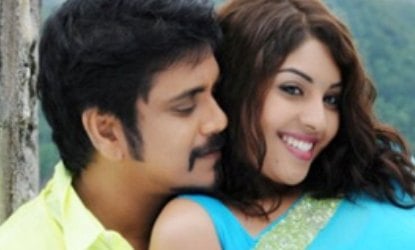 Nagarjuna as Bhai is an underworld don in Hong Kong, comes to Hyderabad to save his partner David (Ashish Vidyarthi)’s business from an undercover cop Arjun (Prassanna). As he goes step by step procedure to find out who is the culprit leaking the important gang details, finds out Arjun has major link with his past.

Meanwhile, Radhika(Richa Gangopadhyay) falls in love in the first instance with Bhai and starts teasing him to the core. Things take a vital turn around when Bhai sees his family in trouble. To help his family Bhai turns as Event Manager and comes to make his sister Geeta (Zara shah)’s marriage. Will the undercover cop leave Bhai ? What is his relation with Bhai in his past ? Will Bhai accept richa love ? will his new role as Event Manager will it work out or is it the beginning of turmoil forms the rest of the storyline.

After Ragada Nagarjuna took some time making films like Damarukam, ShirdiSai & GreekuVeerudu. Now actor is back trying his luck at comercial genre this time with Bhai. Nagarjuna reminds us of his Don with his Bhai looks later shifts his base to sentimental family touch and give give deja vu of his character in King. Actor given his best, but lack of originality in his character his effort goes into vain.

Richa Gangopadhyay had nothing to do other than look pretty& groove to the music. There is no doubt that Brahmanandam & MS Narayana jokes are turning out to be too monotonous & stale, but they does manage to infuse a few laughs.

Sonu Sood, Ashish Vidyarthi and Prasanna were wasted in limited characters. Hamsa Nandini and Nathalia Kaur sizzled in the Item numbers. As for the remaining cast, all of them just sleep walked through their roles.

The movie seemed to be taken the mould of yesteryear style. Bhai runs on the thin storyline, gives us deja vu of films like Basha (Younger brother turns out to be a Police officer), Boss (Flash back episode where hero’s father accidently kills a kid and lead actor underoes imprisonment) and Baadshah (As actor comes back to his family as Event Manager make them comfortable).

Bhai goes to prison and to get closer to his family he does everything he can. Explaining the rest of the story here won’t help making the story sound better. I seriously doubt whether Nagarjuna read the script before committing this movie.

The BG score was overdone, the songs by Devi Sri Prasad seemed okay passable, the script and dialogues were quite ordinary, the comedy scenes got continuous booing from the crowd and the fight scenes were honestly quite hilarious.

Editing could have been crispier. Half of the scenes in the flash back and Hong Kong could have been easily chopped. Even cinematography from Sameer Reddy was mediocre. The major asset of the technicalities is Production values of Annapurna Studious. They are grand in every frame.

First half of the film is cery ordinary and predictable. Even interval twist can be predicted. Second half counts on the family background but movie totally goes on the same lines of recent Baadshah. What movie was missing is a heart. Movie just made to cash on Nagarjuna’s family stardom. If the opening sequences had been much simpler and realistic, the film would have been accepted better.

A don coming to Hyderabad just to kill a small undercover cop is not justified in the script. Inspiration links in the story and un-pardonable songs sitautions made the film bitter. Nagarjuna’s Bhai has absolutely nothing to offer to movie lovers. But if at all, fans are expecting for an Diwali bonanza, I am sure this is going to make them pretty disappointed.