Alia Bhatt Flaunts her baby bump for the first time

Alia Bhatt Flaunts her baby bump for the first time!!! Bollywood actresses alia bhatt and ranbir kapoor are in a lot of headlines these days for their film Brahmastra. Apart from this, the couple is also in a lot of discussion about their marriage and then their recently announced pregnancy. For the past several days, actress alia bhatt was seen in different places in loose clothes. In such a situation, everyone was saying that the actress is resorting to loose outfits to hide her baby bump. But now the Filmy actress has flaunted her baby bump in front of everyone. 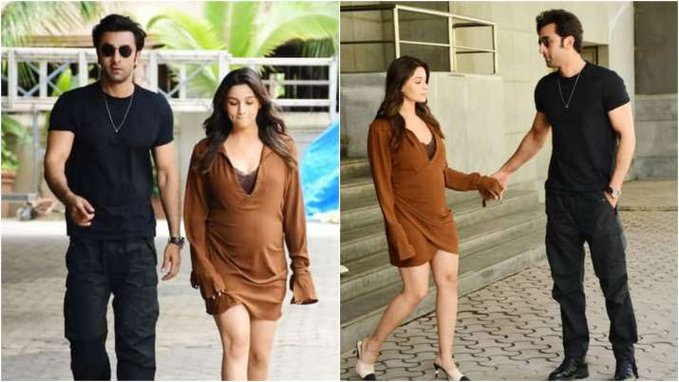 The actress has finally started promoting her upcoming film Brahmastra with her husband and actor Ranbir Kapoor. In the same sequence, the actress and ranbir kapoor recently attended the launch event of the song preview of the song of the film with Brahmastra director Ayan Mukerji. alia who was seen in loose outfits continuously for the past few days flaunted her baby bump for the first time. At this launch event, the actress appeared in a brown colored body fit dress. Along with this outfit, she paired two-tone heels.

At the same time, talking about actor ranbir kapoor, during this time he was seen in black color casual wear. Let us tell you that this is the first time after marriage that both of them have come together with the media. During the event, Ranbir-Alia not only appeared together but also posed fiercely in front of the paparazzi. After a long time, this couple, who were caught on camera together, looked beautiful together. Talking about the film, the first song Kesaria from Brahmastra has already been released. people liked this song with the tremendous chemistry of Ranbir-Alia. At the same time, the second song of the film deva deva is going to be released this monday i.e. on august 8. Directed by Ayan Mukerji, the film will see Ranbir and alia sharing the screen for the first time. Apart from Ranbir, and alia, other actors including actor amitabh bachchan and actress mouni roy will be seen in important roles in this film.