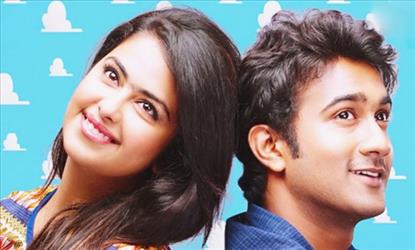 They say nothing can stop true love... but they don’t know about east west BPO employee Kiran (Santosh Shobhan). He has aggression against America due to his relation with his family. That’s when he comes across Keerthi (Avika Gor) and tries his best to impress her and she falls in love with Kiran. On one side, Keerthi’s father Sarveshwara Rao (Ravibabu) becomes an issue in their budding love and Keerthi gets to know the secret of Kiran. Two love birds fight over a small issue and Keerti leaves to USA. Whats Kiran’s issue with America? Will Kiran leave to America to get his true love? Forms the rest of the story line.

Santosh Shobhan has right requirement to fit in this role, but he needs to work a lot on his histrionics and screen presence. He also tried to imitate Nani, Mahesh Babu and Srinivas Avasarala in every alternate scene. Avika Gor seems okay and has put on a lot of weight. Abhishek and Rohit Varma did a decent job. Ravi babu, Satya Krishnan are wasted in insipid roles.

The story of Thanu Nenu is damn to simple, but the problem here it’s too predictable and lacks the fizz to a great extent. There aren’t many things to say good in this film, the story moves in a promising way in the first 10 minutes and few topics could have been given more depth especially the budding love story. In the second half Ravi Babu – Avika – Santosh scenes looked uneven. Like, Ravi Babu never really cares about the proceedings regarding his American dream with Avika Gor; there is no proper reason why Avika hates Santosh and likes later; Satya Krishna never really cares about Husbands death; Even Rama Koti Book point was not properly executed by the maker… etc.

The story often moves ahead without definite direction from the start and lack of a feel good script is evident mostly. The highlyceremonious way that the film unrolls also tends to be a major letdown. Technically, Production value is below par while editing seems too abrupt that the film finds it difficult to have a logical flow, may be the editor would have chopped too many poorly shot sequences (Esp. scenes b/w Avika - Santosh). Music composed by Sunny M R is fine while BGM is repetitious. Cinematography bySuresh Sarangam is in tune with the mood of the film.

The trailer of Thanu Nenu was pretty promising and songs were alright, but the film as a whole just doesn’t live upto its hype. Director/Producer Ram Mohan intentions to provide a feel good romantic entertainer fails as he let down by a poor screenplay. Overall, Thanu Nenu is a romantic entertainer with hardly any romance or barely any comedy. Its disappointing start for Ram Mohan as a director in the Telugu film industry. The movie can be avoided.