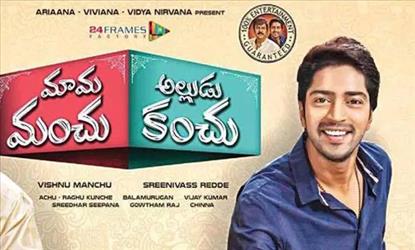 NothingNothingEverythingMama Manchu Alludu Kanchu is an extended version of Allari Mogudu (1992). It’s the story of Bhakthavatshala Naidu (Mohan Babu) who gets married to 2 woman for the flimsiest of the reasons that defy all logic. Priyamvada (Ramya Krishna) and Suryakantham (Meena) are the two ladies that Naidu is married to, has a son Gautham (Varun), and a daughter Shruti (Poorna). Due to a mistake by Ali, Gautham – Shruti birthday gifts are exchanged and they plan to meet. To stop this Naidu appoints a sidekick in the story Balaraju (Allari Naresh). Unfortunately Naidu’s plans get spoiled as Balaraju gets attracted to Shruti. Did Naidu accept the budding love? Will two wives of Naidu meet each other and confront him? Forms the rest of the storyline.

Collection King Mohan Babu is drearily misfit in the role of Naidu. He is passable in his part, despite his characterization failing him. Allari Naresh tries to make the plot interesting, but he fails as his story goes nowhere. Veteran actress Meena and Ramya Krishna are extremely passable. Poorna gained some weight and does nothing more than smiling. Ali, Sonia and Varun Sandesh are wasted in their roles.

Its double trouble again. Once again. Collection King Mohan Babu is back in a tasteless family drama “Mama Manchu Alludu Kanchu”. Director by Srinivas Reddy, it’s an extended version of Mohan Babu, Meena, Ramya Krishna hit film of late nineties Allari Mogudu, where hero has two families. How his life ruffles between the two is what this regressive story is all about. Now, Director – Screenplay writer Srinivas Reddy plans to extend what happens post marriage. He sticks to tried and tested formula – a comedy of errors and you are left wondering how many times he will continue to repeat the same formula. The film flow is horrible till interval and loses the steam then on, as Srinivas Reddy adds an element of suspense making you wonder what’s he really trying to do with this film.

This two line plot is known to the viewer in the first 15 minutes itself and then its all about the characters chasing each other and trying hard to make you laugh with their so called hilarious comedy and one liners written by Sridhar Seepana. Too much of stress has been given on the dialogue delivery and the tone of the characters, which eventually succeed in frustrating audience to the core. Even highly promoted act of Allari Naresh (50th movie of his career) has also been used in very unimpressive way, which doesn’t even stay in the viewer’s mind. There is no detailing to any character and hence you never find out what business does Mohan Babu actually run, which gives him the luxury of maintaining two wives in two houses, along with some elegant cars. Even the wives (Meena and Ramya Krishna) are spiffed up creatures who play dress up – shopping and make their kids marry. When a director tries to attempt film like this you cant be preachy and offer justification at least by end, which is very hard to digest here. Production values of 24 Frames Factory are deficient, as the movie looks tacky and outdated. Songs by Koti, Raghu Kunche and Achu are introduced in irrelevelent times and even the BGM is one thing that will gravel you to the core. Cinematography, Editing are second graded could have used some neat work, yet they aren’t the reasons for it to fail. Its Srinivas Reddy, and Srinivas Reddy alone.

The plot like “Mama Manchu Alludu Kanchu” is a ballsed up made up story by a dipso and the characterization goes hand in hand with the retarded storyline and direction. The script is incomprehensible. The incoherence is definitely not blissful. All in all, those who have thought after watching Soukyam, that Telugu cinema will sink no further. Just try to watching 15 minutes of MMAK and you would be abnegated of that notion. Stay Away.