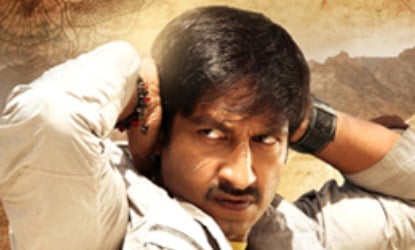 What Is Bad: Lack of entertainment, No mass elements for B&C center audience, Missing tempo at times

Boring Scenes: Nothing much in particular but few scenes in first half

Watch It or Not?: After a long time decent adventure film came out in Tollywood, go for it.

Suryanarayna Varma [Suman] a diamond merchant and during India-Pakistan partition he accidentally drops his wealth of 900 diamonds at a treasure hiding place of a popular king. His grandson Gautam [Gopichand] comes to know about this treasure and desires to achieve his grandfather's wealth at any cost. Gautham comes to know that this treasure place is at Pakistan and Sreenidhi [Taapsee] is only source to reach that place. Did Sreenidhi help Gautham to reach Pakistan? Does Gautham find the treasure? What difficulties did Gautham face to achieve his grandfather wealth has to be seen on silver screen.

Gopichand has bounced back once again in terms of his performance especially in action-fight sequences. He carried off the entire film on his shoulders well and portrayed a settled performance.

Taapsee has less scenes but her character played key role in the movie. She made her presence felt even with less run time. Bollywood actor Shakti Kapoor gave an intense performance as Sultan, main villain of the film. Dudding given to him added weight to brilliant expressions given by him. Ali's character was very minimal but he gives entertainment every minute when he appears on screen. Suman's special cameo was neat yet effective.

Chandra Sekhar Yeleti has once again proved that he is ahead of time with his films and gave an impressive screenplay along with smart direction skills in Sahasam. Chandra Sekhar kept the suspense factor alive till the end titles in Sahasam making audiences glue to their seats.

Shyam Dutt cinematography stands as major asset for Sahasam. Shyam made every frame look visual treat, in action sequences, climax episodes his work is top notch. Music director Sri has given extraordinary background score but songs disappoints you. Venkateshwar Rao editing is fine. Action sequences choreographed by Selva are good, last but not least art work by Rama Krishna gives everyone a new experiences and production values are rich.

Firstly we must appreciate director Chandra Sekhar Yeleti and Gopi bringing a adventurous film to Telugu audience after a longtime. And should applod for trying a non-commercial film beveling in the content during the time where commercial films ruling industry. If you go without any expectation, Sahasam will surprise and impress you without doubt. But don't think that Sahasam is an Indian Jones or a Hollywood range adventurous film but far better that last Telugu adventure zone flick Takari Donga.

Fantastic cinematography, art work, Chandra Sekhar yelleti brand screenplay will give worth to your ticket. At overseas Sahasam will strike gold but its hard to click at B, C centers and A centers everyone will like it. Coming to negative aspect of Sahasam cinema flow loses at times, Taapsee is seen totally in a non-glam role, Gopichand strong mass appeal cannot be seen and entertainment quotient is very minimal.

Bottom Line : After a long time decent adventure film came out in Tollywood, go for it.