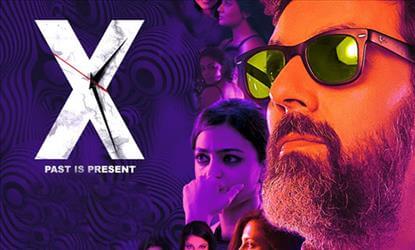 X-Past is Present is about life of a film maker and the women in his life. The one line sounds simple ? But for 11 directors and 11 writers, each story around each woman was told in their own style. Everyone has narrated it with their own perspective of love, sex and relationship. Rajat Kapoor (Kishen) is a successful director who had several women in his life. One night he realizes how each women shaped his life. The movie is just one night in life of Kishen and a day after. He is being forced to visit every woman through lots of flashbacks. According to him, Sex is the only way he gets connected with women. But it is not just sex he seeks. He looks for new characters. He also find new ones. The movie is not an anthology. It is a kind of complex script to handle.

Rajat Kapoor and Anshuman Kha has lived upto the characters. He is so believable as Kishen. He calls himself as 'K'. All the female leads have done their roles with much dedication and apssion. The only minus point was Aditi Chengappa. he woman K meets at a bar is supposed to remind him of all the women in his life.  But Aditi's bodylanguage and dialogue delivery are below par. She is not even sure what she has to do. Radhika Apte has very little screen space. Rest of them fit into their characters. But every time the close ups happen we have some uncomfort zone. The movie has too much of drama too.

The movie is said as a journey of a director through his past encounters with ten ex-girl friends. The idea has came from Sudhish Kamath. The movie had 11 directors such as Abhinav Shiv Tiwari, Anu Menon, Hemant Gaba, Nalan Kumarasamy, Pratim Gupta, Q, Raja Sen, Rajshree Ojha, Sandeep Mohan, Sudish Kamath, Suparn Verma. Sudeep Swaroop's music is also a positive aspect. If you just thnk, the movie has 11 directors. Even the movie has 11 cinematographers and editors. Even though the movie has various directors, the uniqueness is not missing. Each story has its own shade and that has been the positive as well as negative.

As we said, this is a complex subject to understand. Not everyone will feel comfortable with this movie. Very few can get along with this movie. But this is a welcome genre as this is something new. The stereotypes has been broken for the first time. Tamil director Nalan Kumaraswamy has directed the Swara Bhaskar portion and it is enjoyable. Despite being all those, the movie is just 105 minutes long. The positve and negative aspect of the movie is arious genres and interpretations of love are blended into one. The treatment limits each story to repetitive frames and that is also kind of a draw back.Every scene is an ex-episode and you need substance to keep you engaged. However the interaction is hallow. However the best part is each episode reveals the characters. The sudden shift to 'Thriller' genre when K's name was revealed is one of the key points. Even when the movie ends it gives us a reality of everything around us.