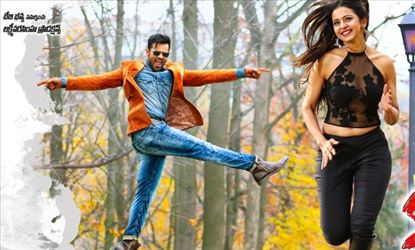 Rakul Preet, Production values, Music Rakul Preet, Production values, Music Villain, Boring commercial template, Editing, Screenplay
Winner story starts with Sai Dharam Tej, who leads a simple life and falls in love with Rakul Preet Singh. After she enters into his life, a lot of changes happened and unexpectedly he has a fight with Jagapati Babu and Anoop Thakur and they are at logger heads always. At one point of time, Sai Dharam Tej is being challenged by the Anoop to defeat him a horse race. Watch the movie to know whether he wins the race or not and who is Rakul Preeth Singh?

The protagonist Sai Dharam Tej has put his heart and soul while doing this character. His style of dancing, dialogue depiction and hilarious sense of humour, has proved once again. Rakul successfully mesmerized the audience with her beauty and did best as an athlete. Jagapathi Babu had given one of the best performance and Anoop did well in his role and managed to bag some more audience into his fans list. Rakul Preeth Singh's chemistry with Sai Dharam Tej had worked very well.

SS Thaman had scored melodious music and the background scoring was amazing. Chota K Naidu's cinematography work and the location chosen for the songs are phenomenal and the dream destinations are shown in the big screen exclusively. Gopichand Malineni's making for the comedy mixed action thriller is superb and had made a decent job.

The biggest asset is that the energetic performance of the actors and the rare dull moments. For a person who enjoys the typical commercial entertainers, there is everything in place. From hilarious comedy scenes to the fantastic chemistry between Sai and Rakul, it has everything. Usually movies can still work wonders if executed well because telling a routine masala story is not an easy task, especially if it is done with a lot of meaningful and with effective entertainment. It seems Gopichand has not succeeded in crafting the film with mere perfection.