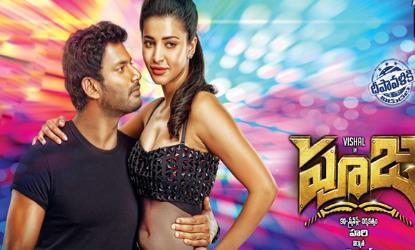 Vasu (Vishal) son of G K (Raghuvaran) one of the most respected and among the wealthiest men in Vishakapatnam. Due to some misunderstandings Vasu earns his mother’s (Radhika Sarathkumar) wrath and starts living with his friends at a market place. Accidentally, Vasu meets Divya (Shruti Haasan) in a shopping mall and gets attracted to her. In a short time, both start liking each other but things turn around when his mother calls him to village take revenge on Siganna (Mukesh Tiwari). Who is Siganna? What’s his issue with Vasu’s family? What led to misunderstandings between Vasu & family for four long years? Why did Shivaram (Sathyaraj) support Vasu’s retaliation? Forms the rest of the storyline.

Vishal is very good as the protagonist. His performance is the film's only strength and, to an extent, makes up for the poor script and weak characterization. Shruti Haasan has nothing much to do except rollick around in song sequences. It's also good to see a slimmer, Andrea Jeremiah in an item song. Sathyaraj bowls you over with his performance as the tough ADSP Shivram Nayak. Unfortunately, his role is short-lived, but he does have few powerful sequences. Soori is fine, managing to evoke some laughter from the audience with his senseless one-liners. Radhika Sarathkumar, Prathap Pothen, Sithara, Kaushalya, Jayaprakash, Manobala making up the long list of people who have appeared on screen at some point in the movie. Mukesh Tiwari is nice add on to the film, with his menacing eyes he can go places.

Pooja is primarily a revenge drama with many of the parts: a happy family, misunderstandings, an intelligent villain, and attack on the loved one trigger the revenge, multiple roles trying to take revenge, that accompany the genre. Pooja with a running time of 160 minutes doesnt even carry a single brilliant shot during its entire duration. Till Interval there is nothing significant happening in the film and hoping for the better second half when the family angle in the film rolls on, but there is nothing in it either. Kannal Kannan has choreographed the action sequences well. Priyan's cinematography is average. What the film suffers from is a weak screenplay. The villains are stereotypic, the climax is clichéd.

Director Hari needs to get out of the star based formula films and must try his hand at making some different massy films with the good cast. Movie even has few inspirations from Hari’s previous films like Arul, Bharini, Veghai etc. Dialogues by Shashank Vennelakanti are nitwitted. For Example, “Maa Thatha oka lucha, Maa Nanna oka porambokku alanti yeddavalaku poyina nenu entha buildup evvali”, “Lavanganni market lo konachu love ni ye market lo kontaaru”. Director should have worked a bit more with dialogue writer for better results. Songs by Yuvan Shankar Raja are another disappointment. Background score was decent & showed Yuvan's growth as a music director. The Editing was pretty decent considering how lousy the movie turned out to be. Dubbing of the film is okay, but the one dubbed for Shruti Haasan was too loud. Even limited VFX used in the film is dull. Production Values of Vishal Film Factory are grand.

All in all, Pooja is a felonious waste of time, effort and money. Despite few decent performances by the actors & the technical crew, Pooja fails to create the much needed impact because of a sloppy storyline. If the screenplay had been much tauter, this movie could have gone to become a decent hit at the box office.

When movies like “Raja Rani”, “Bhadram”, and “Indrudu” try to lift the standards of Tamil films, “Pooja” type of movies end up pushing them back by a solid twenty odd years.