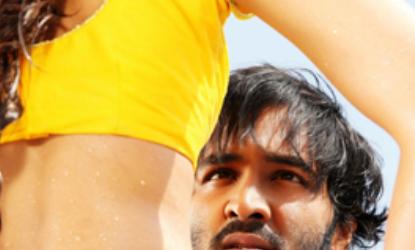 Anna (Mohan Babu) is a political heavyweight who sort of runs a parallel government in Rayalaseema. People treat him as their Messiah and come to him when Law and Order fails them. Anna has two sons -Bhushan (Kishore) and the other Krishna (Vishnu Manchu) Who is an student. Bhushan does not have his feet firmly on ground and is equally unstable with his tongue and temperament. Krishna (Manchu Vishnu) on the other hand is quiet and sincere. The story is about how father and sons go through a storm of political moves against Anna.

Mohan Babu is in his mark elements again with this film But his characterization is not that enough to elevate his role. There is good applause for his dialogues in Rowdy. Manchu Vishnu Babu Voice and bodylanguage suited his character, but he might have looked better if he had worked on his mannerisms in the film. We all know what an actor Mohan Babu is. In Rowdy, Vishnu proves that he too has got the genes.Shanvi is ok. She has few scenes which I think she's not too good at! And like in most RGV movies, the supporting cast too delivers bravura performances. Kishore, Tanikella Bharini & Team are the villains and the former has a meatier role than the latter. Jaya Sudha has limited role but she delivers well. Newcomer Bhavani is good. Ravi Babu is wasted in a small role.

The movie is totally inspired from Sarkar and Sarkar Raj, Which are inspired from Godfather (I & II). Even then movie story is a bit different to suit the Rayalaseema flavor and regional politics. RGV has diluted the impact of the original script and has remained unfaithful to the original. The movie is visually very slick. It has a sepia-ish tone for most of the time and the lightings in every scene stand out prominently. Rowdy first half was a letdown, considering the latter half had bulk of the story and happenings. The practicing doesn't match up to the preaching in the end and though it can be put down to revenge, it does come across as something very obvious. There should have been a self-explanatory ending as opposed to a long narrative which uncovers the plots and sub-plots and counter-sub-plots.

The cinematography (by Satish Muthyala) is again RGV-ish (you can almost categorize it as that, after all these years, especially post SARKAR) but there are a lot of haphazard and out of slo-mo shots (RGV's Over Creativity). The music doesn't have a great role in a film like this one, so that way, it's alright. They try to cash in on the 'Rowdy Song' track here too. Though the effect isn't the same this time around! The background score is decent (and almost similar to the earlier film). Somewhat too much prominent and overbearing at times. Editing of the film should have been crispier. The Fights in the film are to Faction-istic. Production Values of 24 Frames are Fine.

The First half of Rowdy drags a lot and second half works to a bit. The high point of Rowdy is Mohan Babu's performance and coming to negative points first being its slow narration and dragging the Sarkar plot to the core to give it a convincing end that diminishes its appeal. The entire premise of the movie is mighty dark and depressing and there's a hell lot of violence happening around.

If you are a huge fan of the Manchu's and involutions of a political power struggle interests you, this movie sure is a one time watch. But If you have watched Sarkar (1 & 2); this ain't your cup of tea.