State education minister Jagannath Mahto has approved the scheme of change in the color of students' dress on behalf of jharkhand education Project Council.

After changing the buildings of about 35,000 government schools in jharkhand to green and white, now preparations are being made to change the colors of the clothes of 42 lakh students studying here. To refresh the mind of the students from class 6th to 12th they will get new color dress. State school education minister Jagarnath Mahato has informed that the uniform color for students from middle school to higher secondary level will be green, while students of primary schools will wear dark blue and pink colours. Currently the school dress color for students of all levels is uniform maroon in the lower part and cream white on the top. 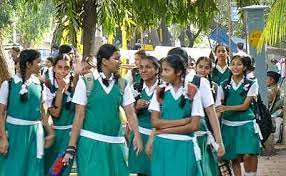 The opposition bjp in the state has described this move of the government as a political agenda. The party has claimed that the colors of the middle and high school uniforms are inspired by the green and white flag of the state's ruling party jharkhand Mukti Morcha. bjp state president deepak Prakash said that politics is now being taken to the school level by JMM. This is unfortunate. 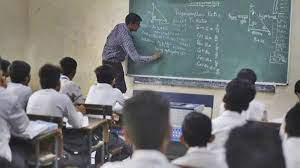 State education minister Jagannath Mahto has approved the scheme of change in the color of students' dress on behalf of jharkhand education Project Council. The official notification in this regard will be issued in a day or two. 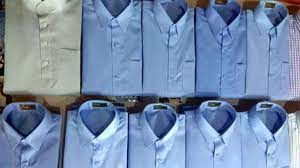 dress of this color

The new uniform for classes 6 to 12 will have a dark green lower part, while the upper part will be a light green shade. The dupatta of the girls will also be of dark green colour. For classes 1 to 5, the lower part of the dress will be dark blue in color and the upper part will be pink. The tie for primary classes will be of dark blue colour. The new uniform will be started from this academic session.

The education minister said that the purpose of changing the color of the students' dress is to inculcate a new spirit in the minds of the students. His uniform has not been changed since 2015-16. The minister said that the color chosen for middle and high school students is very close to nature and is also good for the eyes. However, bjp says that we all like green color but the government is pursuing its political interest behind this color of nature. school students should be kept away from politics.

The work of painting the schools continues

More than 35,000 government schools in jharkhand are also being painted green and white. This color is also associated with the party flag of JMM. The education minister said that the work of painting the school buildings is going on and it will be completed in a month. The walls of the school buildings shall be white in color and shall have stripes. Along with this, the windows and doors of the buildings will also be green.

On the other hand, the state government has issued new guidelines for the prevention of corona epidemic. In the notice issued, it has been made mandatory to wear face cover/mask in closed places, workplaces and public transport. Along with this, spitting in public places has also been banned.