Pre-wedding photoshoot Ali-Richa lost each other

Pre-wedding photoshoot Ali-Richa lost each other!!

Photos of ali Fazal-Richa Chadha's pre-wedding photoshoot surfaced, the couple was lost in each other

First of all, let us know that Richa and ali met for the first time on the sets of the film 'Fukrey'. From here, a friendship started between the two and fell in love. Now the couple is about to take their love a step further and tie the knot. Now the pre-wedding functions of both have started, which are being done in Delhi. Now let's talk about the latest photos of Richa and Ali. Richa has shared two pictures from her instagram account, which are photos of her pre-wedding photoshoot. The happiness of the couple can be seen in these pictures. During this, while Richa is looking very beautiful in a peach color lehenga, the groom raja Ali is seen in a beige color sherwani. Richa accessorized her look with neckpieces, rings, and bracelets in her hands. She completed her look with minimal makeup and loose hair. Sharing the photos, the actress wrote in the caption, "Mohabbat Mubarak." Earlier, on 29 september 2022, Richa had posted some videos of her mehndi on her instagram story, in which she was seen flaunting her mehndi. Richa's Mehndi design was unique, as she had a cat face in it. Richa has two cats, whose names are 'Jugni' and 'Kamli'. This is the reason why the actress has also made the face of cats in her hands. 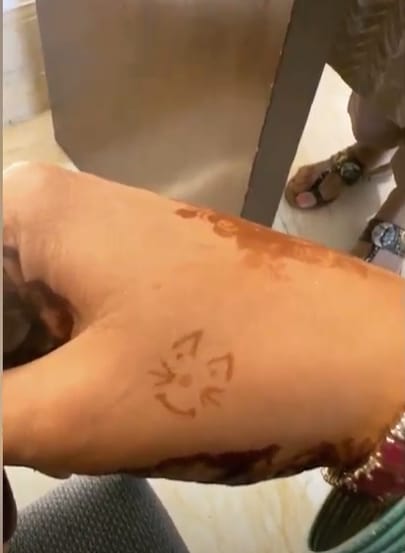 Let us tell you that the marriage of Richa and ali fazal will take place on 4 october 2022. At the same time, the couple will also hold a grand reception after the wedding. The invitation card for Richa and ali Fazal's wedding is also quite interesting. Guests have also been allowed to use phones at this wedding. However, a condition has been placed that no one will click the wedding pictures.