Due to its colourful composition, Hormuz Island is often referred to as "Rainbow Island." Iran's Homeland is a geologist's Disneyland, with brown streams, crimson beaches, and fascinating salt caves. 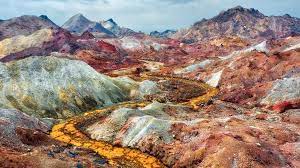 A tour guide on the southern Iranian island of Hormuz, said, "You have to taste this dirt." I was wary of his suggestion since I didn't grasp the crimson dark mountain or the mineral landscape. Hormuz is a teardrop-shaped shiny salt dome located 8 kilometres off the Iranian coast in the Persian Gulf's dark blue seas.

There are over 70 minerals discovered here and almost every square kilometre of Hormuz Island's 42 magnificent square kilometres tells a tale about the island's creation. 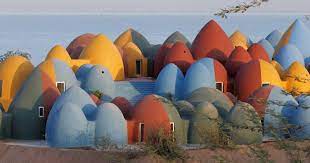 Brownish streams, crimson beaches, and salt caves have all resulted from this Natural Geography. Because of this colour mix, Hormuz Island is often referred to as "Rainbow Island."

It is also thought to be the world's only edible mountain. The red tint of the peak called Jelak was caused by hematite, an iron oxide believed to have been formed from the island's volcanic rocks.

"Red clay is utilised as a sauce, and Surak is the name of the sauce. It can be used to make bread. red clay is employed in paintings by local artists, dyers, pottery, and cosmetics, in addition to culinary uses.

The Rainbow Valley is located southwest of the island. The mountains are painted in a range of colours, including red, purple, yellow, brown, and blue, and offer a breathtaking perspective of the multicoloured soil.

This natural treasure has not been fully noticed by travellers around the world, despite its historic and natural features. If greater attention is paid to the development of Hormuz' infrastructure, this island has the potential to become a significant tourist attraction.

Tourists are now being served home-cooked meals by locals. people are transported over the island using rickshaws and motorcycles. Hormuz is without a doubt geologists' Disneyland. The people' veins are filled with delicious soil and that's unique.